About Us
Village Roots started with our vision to grow fresh, healthy and safe food for our community. Ellen and I had been apprenticing on farms and homesteading for a couple years prior and were attempting to grow and prepare most of our own food. We where growing lots of staple crops and stored most of our food for the winter. We made herbal tinctures and dandelion wine. We fermented sauerkraut and beer and dried lots of herbs for tea. We also kept pigs and slaughtered our own chickens. It was always important to us to share these experiences of living off the land with kids, and anyone else who was interested. We sold a few vegetables at farmer’s markets, but mostly we ate them.

In 2004, Ellen and I moved to Orchard Hill Farm in East Alstead, and in 2005 Ellen decided to start a CSA (Community Supported Agriculture) with her good friend and growing partner Mary Ellen Sheehan. Our farming and teaching ventures at the time were called Digging Roots. It was very important to us that we sink deeply into a place and to learn from, and be fed by, the land we lived on, hence the name Digging Roots. Mary Ellen’s business was the Acworth Village Garden. Ellenwould grow vegetables here at Orchard Hill and Mary Ellen behind the Acworth Village Store and collectively they would grow for a 60-member CSA that first year. Put Acworth Village Garden and Digging Roots together and what you get is…Village Roots. 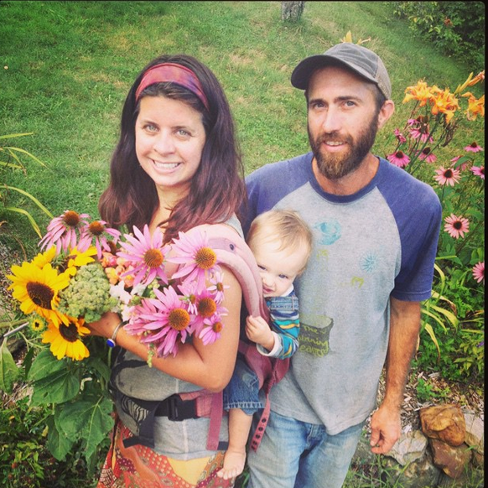 photo Sonia Keiner
Mary Ellen moved to New York in 2006 to take a well paying job as a county farmer. Just this past year, her and her husband Matt bought a farm just outside of Syracuse, NY where they will be growing vegetables for their own CSA. Mary Ellen also works for NY NOFA (North East Organic Farmers Association) and Matt works with a local apple cider producer. They are much missed, but are doing beautiful work where the soil is sweet and the rocks are light (limestone).
Village Roots has gone through several iterations since 2006. Ellen continued the CSA through the 2012 growing season, but reduced the number of shares since she was also teaching a full schedule at The Orchard School. She started focusing more on key crops such as garlic and carrots and on herbs, flowers and other perennials. We had also been raising some animals for ourselves, namely laying chickens, turkeys and pigs, but with more and more people being concerned about where their food is coming from, and how it is treated I decided in 2008 to start experimenting with some more varieties of animals. Now we raise laying chickens, broilers, turkeys, laying ducks, meat ducks, beef, lamb and rabbits. As you will read, we raise these animals outside, on pasture and with great care and empathy. We only sell directly to the customer. If you buy meat from us, you will know exactly where your animal came from.

Village Roots now encompasses all of the food that we grow, sell and teach about. Village Roots means vegetables, fruits, herbs and animals that are grown together in a way that is harmonious; where each living thing plays an import role on the farm, and collectively over time, fertility it built and so are possibilities.
We started this endeavor because we wanted to know the food that we were putting in our own bodies. Now we see no other way. In a world full of monoculture crops, GMOs, hydrogenated oils, high fructose corn syrup, neurotoxic chemicals, and factory-farmed animals; what we buy at the supermarket can no longer be considered safe. In many cases, it is no longer food. We now farm in direct opposition to the political idea that organic cannot feed the world. We farm in direct opposition to corporations such as Monsanto and Tyson Foods, and to the fast food culture that raised us. What we farm FOR is healthy communities and economies. We farm for our love of the land, and because we learn lots from our neighbors and the plants and animals we raise. We farm to build soil. Mostly, we farm for the Earth.

Thanks for checking us out. Marty